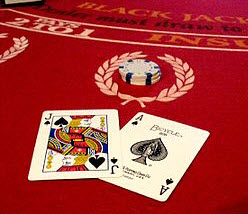 The freedom that online casinos bring to the tables mean that lesser known games can be easily accessed and enjoyed. This has opened the door for some versions of popular games to be among the top entries on the list and one of the examples is Pontoon.

Although Pontoon is quite popular in Australia, Malaysia and Singapore, it hasn’t quite won over the players in casinos in Europe and in the United States. For those interested in checking this casino game out, it shouldn’t be too difficult to get the hang of things since Pontoon is very similar with blackjack but has some significant differences that need to be considered when playing.

As a small note, we should not confuse this card game with the British variant of blackjack which is called Pontoon as well.

Right off the bat, it is easy to see that Pontoon is very similar to blackjack, or even better, to Spanish 21. The layout for the table is pretty much the same and a bet is needed before the hand can begin.

Pontoon is played with regular 52-card decks. After the bet is placed, the dealer will deal two cards to the player facing up and two cards to the house facing down. Unlike blackjack, both dealer cards are facing down and the player can’t use that information in order to make a decision. The goal of the game remains pretty much the same as the winner is the one who gets closer to 21 from the total value of their cards without going over it.

If the value of the hand is lower than 14, the player must hit and get another card. This is yet another difference from the standard blackjack version where the player could sit on any valid hand. If the first two cards have a total value of 21, it is called a Pontoon (not Blackjack) and it pays 2:1 (unlike 3:2 in blackjack).

If the hands have the same value, the player will lose the bet as the dealer wins all ties and there are no pushed wagers. Getting a hand of five cards without going over 21 can only be beat by a Pontoon.

There are also some differences when it comes to splitting hands. For example, Aces cannot by split and Pontoon hands have limitations on how many times the players are allowed to split their cards during the same hand. Most versions only allow for re-splits once.

However, one of the biggest advantages of playing Pontoon is that since the dealer doesn’t show any of his cards, it is possible for the player to hit and get 21 in order to win the hand even if the dealer had a natural 21. This is impossible in both regular blackjack and in Spanish 21.

The combination of rules can vary between versions, as seen in casinos, and these in turn make the house edge vary. However, the general average with eight decks in play and a good part of the Pontoon rules active, the house edge is lower than 0.40% with optimum play.

The most important similarity Pontoon has with Spanish 21 and blackjack is that players can use basic strategy in order to make the house edge very low and thus have a great chance at winning. Most of the strategy is based on Spanish 21, with the crucial difference that the dealer is not showing one hole card, as well as some restrictions for splitting and doubling.

This also means that the Pontoon strategy is easier to follow since you don’t have to worry about the dealer cards. A good exception to keep in mind is that it is recommended to hit with four cards in the hand since five cards can beat anything but a natural 21. Doubling on four cards is also a good idea since the odds of getting paid are very good if there is still room under 21. As a general rule of thumb, doubling is done on four cards of 16 and lower.

Soft hands are quite easy to play as it is recommended to hit on soft 18 or lower and stand on anything else.

It can take a bit of playing to get used to all the differences Pontoon brings to the table from regular blackjack but it can be more profitable if played right.